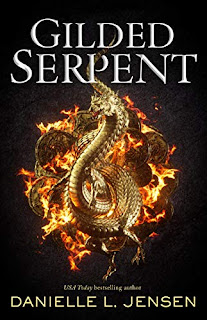 From bestselling author Danielle L. Jensen comes a thrilling new novel in the Dark Shores world, a series that Sarah J. Maas called "everything I look for in a fantasy novel."

THEIR BATTLES ENDED IN VICTORY

Lydia returns to Mudaire to enter training at the healing temple. But instead of fighting to save lives, she’s convinced she is doing more harm than good. She delves into the history of the gods only to discover a truth that will change her life forever.

His birthright as commander of the Royal Army is finally in his grasp, but Killian feels anything but victorious. Burdened by his past, he embraces the darker side of his mark—and in doing so, risks starting a war.

BUT THE WAR HAS ONLY JUST BEGUN

Having defeated the tyrant Urcon, Marcus struggles to form a lasting alliance with the Arinoquians. But he is plagued by the knowledge that there is a traitor among his friends, and it could cost him everything that he’s fought for.

Torn between her growing allegiance to the Thirty-Seventh legion and her need to liberate her people, Teriana finds herself mired in a web of secrets. She embarks upon a path that will either save everyone she loves—or put them all in their graves.

Add on Goodreads / Pre-order on Amazon

My immense gratitude goes to Tor Teen for granting me an ARC via NetGalley in exchange for an honest review (you brought joy to a bleak 2020/21!)

First thing first, it took me a whole month to start this book, mostly because I was too excited and – at the same time – too scared. Well, I’m quite happy to report that Gilded Serpent is, hands down, the best book I read this year.

If possible, I loved it even more than Dark Shores and Dark Skies put together, that’s a feat considering how much I loved those two! Gilded Serpent is, to me, a dream coming true as we can finally read Marcus’s, Teriana’s, Lydia’s and Killian’s POVs all in the same book (yay!). Even though four different POVs can be difficult to manage it is not the case here, more like the opposite. The different POVs are beautifully done and the writing flows easily and smoothly making it a real joy to read.

Danielle L Jensen managed to craft such achingly complex characters that’s impossible not to love every single one of them. I might have a soft spot for Marcus but it doesn’t mean I don’t adore the others as well. It was wonderful and, at times, heart-wrenching, to be inside the head of these four.

I practically drank in every word, even tried to read as slowly as possible to make the book last longer. I always have a case of separation-anxiety where these characters are concerned! I’m not going to lie, for once, I really liked the romance and I cheered when both couples grew even closer. Of course, some kind of heartbreak and inner conflict/turmoil is always behind the corner but, in truth, it adds to the beauty of it.

He was and confirms himself to be my favourite (behind his impassive mask, he’s such a cinnamon roll!). It was insanely good to see him more off-guard and I adored the way he started to emotionally open up to Teriana.

I have always admired -and still do - her strength of character. She’s, simply put, kick-ass.

My quiet but extraordinary bookworm! What’s not to like? I wish she could see herself as Killian sees her: a strong, independent and beautiful woman.  I have always loved her quiet strength.

What can I say? He's wonderfully and fiercely loyal. The devotion he shows for his country and for the people he loves is… everything.

-Agrippa! If you have read Tarnished Empire you might understand my excitement.

Gilded Serpent’s plot turned to be more far reaching and twisted than I had expected, it even managed to shock me a few times (OMG, the secrets, the twists!!)! The threads are finely woven and masterfully crafted. This is a book that keeps you constantly on your toes, with rarely a dull moment. It’s a terrific and perfect blend of complex characters, intrigues and otherworldly meddling… I’m in awe!! I can’t tell if I loved Gilded Serpent because it tore my heart out or in spite of it, probably both.

I’m keeping this review spoiler free but THE ENDING—THE ENDING (well, the last handful of chapters, really)! How in the name of Hell am I supposed to survive until the next one??? I can’t, I just…can’t!!

Review: All Down But Nine by Kat Ross (Lingua Magika #2)

ALL DOWN BUT NINE 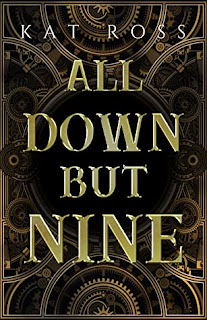 HARD TO CATCH. HARDER TO KEEP.Lee Merriweather has fled across the line into Pedro Braga’s jurisdiction, an untamed desert too vast for even the ruthless Guardia Territorial to keep any semblance of order. The Carnarvons want him dead or alive – and with Lee’s attitude, the first seems most likely.The trail south runs straight through two thousand miles of badlands. To find him, Ruth and Sebastian must survive sabotage, bloodthirsty bandits, and fresh horrors at the Reverend Jolly’s church in New Jerusalem. The hardships draw them into a passionate affair, but loyalties are put to the test when they finally reach the capital of Aguadulce and all hell breaks loose.Ruth has privately vowed to stop Sebastian from killing Lee, even as the young savant seems bent on his own destruction. And he’s just a pawn in a game with higher stakes than anyone realizes. One that goes beyond empires. One that encompasses worlds.The phantoms are the key. But can Ruth uncover the truth in time to save them all?

I was lucky enough to be able to read the book a few days prior the actual release and I'm really glad I got the chance.

As you remember (or not...) Ruth and I had quite a rocky start: I didn't hate her but I didn't exactly like her either; too much of a square for my liking. Well, I'm now happy to report I'm finally liking her.

In All Down But Nine, our girl -at last- realizes that not everything is straight-up black and white (let's pat her on the back!).

Ruth aside, in this sequel the stakes are even higher, not only that but creepiness and gore is around the corner to the point that some parts reminded me of American Horror Story at its best.

“Two phantoms materialized on either side of him, each taking an arm. An instant later, the man was gone. And an instant after that . . . . A red rain pattered down from above, thick and viscous. Those unlucky enough to be standing beneath it were drenched in crimson. They slipped in the mess, crying out in horror and revulsion.”

But don’t worry! It is not all blood and gore! There's also space for romance… the spicy kind that leaves you all warm and fuzzy inside (Jeez I need some decent fan art of the series, can someone oblige please?).

I was always pretty honesty about my love for the character of Sebastian Hardin and in this book He’s smart and swoon worthy even more than usual.  He’s what I call a “precious heartthrob”

Lee is, no surprisingly, up to no good but as Ruth correctly assessed in book one, deep down, "He's a good egg". His somewhat sheltered life led him to be a bit out of touch with the world which translate in a naiveté I find endearing.

Apart from our usual three the cast is enriched by an array of vivid side characters (some pleasant, some less ...Ava being the latter *coughs*. )

There is also huge plot twist which - for the life of me - I didn't see coming (And to think that I'm usually very detail-oriented and a nitpicker to boot but somehow, I missed this.! Well, played Kat! Well bloody played!) and a big revelation concerning the ghosts---my lips are sealed, you'll have to read the book if you want to know more.

Before I risk writing a review longer than the novel itself –let’s wrap things up! All Down But Nine it's a strong sequel, one that improves on its predecessor; painting a vivid, colorful, bloody picture with creepy undertones and steampunk/western nuances that make it extremely peculiar and original. It is also a thrilling rollercoaster!

I really encourage you to give this series a chance because the sequel it's even better than the predecessor and it is the one that really made me fall in love with the world Kat Ross has created.

You can read my review of the first installment here: https://www.goodreads.com/review/show/3252754739?book_show_action=false&from_review_page=1

A Gathering of Shadows
by V.E. Schwab

A Victorian Flower Dictionary: The Language of Flowers Companion
by Mandy Kirkby